From the wildest of storms the brightest of flowers can bloom

When I pitched the concept for this post to South-Western Sydney-based artist and art educator Mariah Calman we were on the brink of a Kleenex moment. Sitting out the front of her house with the engine switched off, we had our first open conversation about her diagnosis of Idiopathic Intracranial Hypertension, a neurological disorder caused by increased pressure placed on the brain. Unavoidably raw, vulnerable and hauntingly autobiographical, her recent sketches leave no room for doubt; Mariah is in pain. The trajectory of Calman’s practice has become similar to that of some of her idols – namely Frida Kahlo and Mike Parr – as she refuses to let her pain dictate her life. 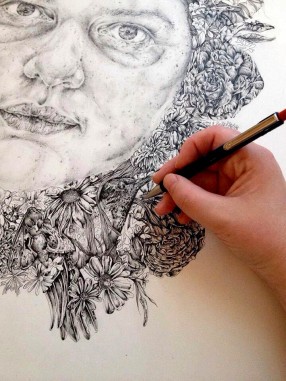 For those who are unfamiliar with Calman’s work, up until early 2015 she was producing highly detailed drawings. Her technique was always on point, seemingly without a mark out of place as she built up textures and form using ink and graphite. Her works explored her artistic idols (see her gorgeously illustrated zine, Artists who stole my heart), personal histories and developed emotional narratives through an exploration of the surreal and subconscious. Her images were complex; fragile in their intricacies and delicate in their application.

Since April 2015, Calman has been learning to live with intracranial hypertension, producing what she refers to as ‘interpretative sketches’. The condition threatened her vision with doctors fearing that by the end of 2015 she would be blind. For a few months she kept this news private as she came to terms with her new reality and learned to manage the symptoms. Navigating the good and the bad days as they come, her newest zine concept seeks to normalise conversation regarding chronic pain and provide a slither of insight into her daily experiences.

‘Self Portrait at 1:23am, 26th July 2015’ is an overwhelming, incomprehensible insight into how much pressure is upon the artist’s brain. Out of necessity and frustration with her inability to sleep, Calman takes to paper with her weapon of choice – a felt tip. Crouched in a foetal position the figure clasps her head and hugs her ankles, unable to move under the pressure placed on her brain. The dense haze, which she uses to depict her pain, envelopes her head and evokes a strong sense of empathy from viewers.

Indicating the location and severity of her chronic pain, ‘Self portraits: visual pain scale from a chronic illness’ is a raw depiction of her pain. The scale marks a distinct shift in her practice as Calman rejects her tight, crisp work for loose expressionistic line work. Overlaying a blend of bruised blue, purple and red watercolours, these lines become more abstracted as the pain intensifies. Due to the pressure on her eyes Calman can no longer produce her intricate images, as much as she wants to.

Mariah draws out of necessity, taking her pain and turning it into something hauntingly poignant. To call her new style beautiful or the artist herself inspirational is to miss the point entirely. Calman is undeniably in pain and learning not only how to manage her symptoms, but re-examining her practice to effectively communicate her new reality and that experienced by 1 in 100,000 people. We may have ended that raw conversation laughing about ideas for potentially visceral performance works but, as her drawings suggest, her pain is no laughing matter. 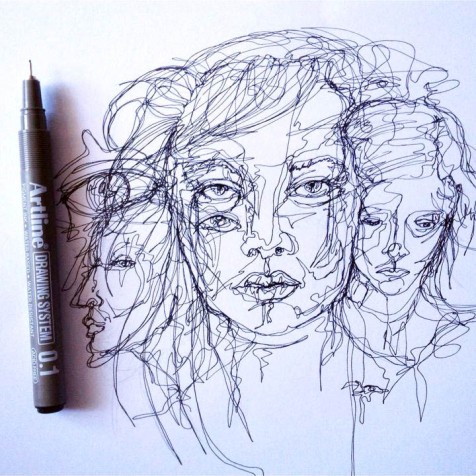 *All images courtesy of the artist.
I would like to thank Mariah for trusting me with writing this text.